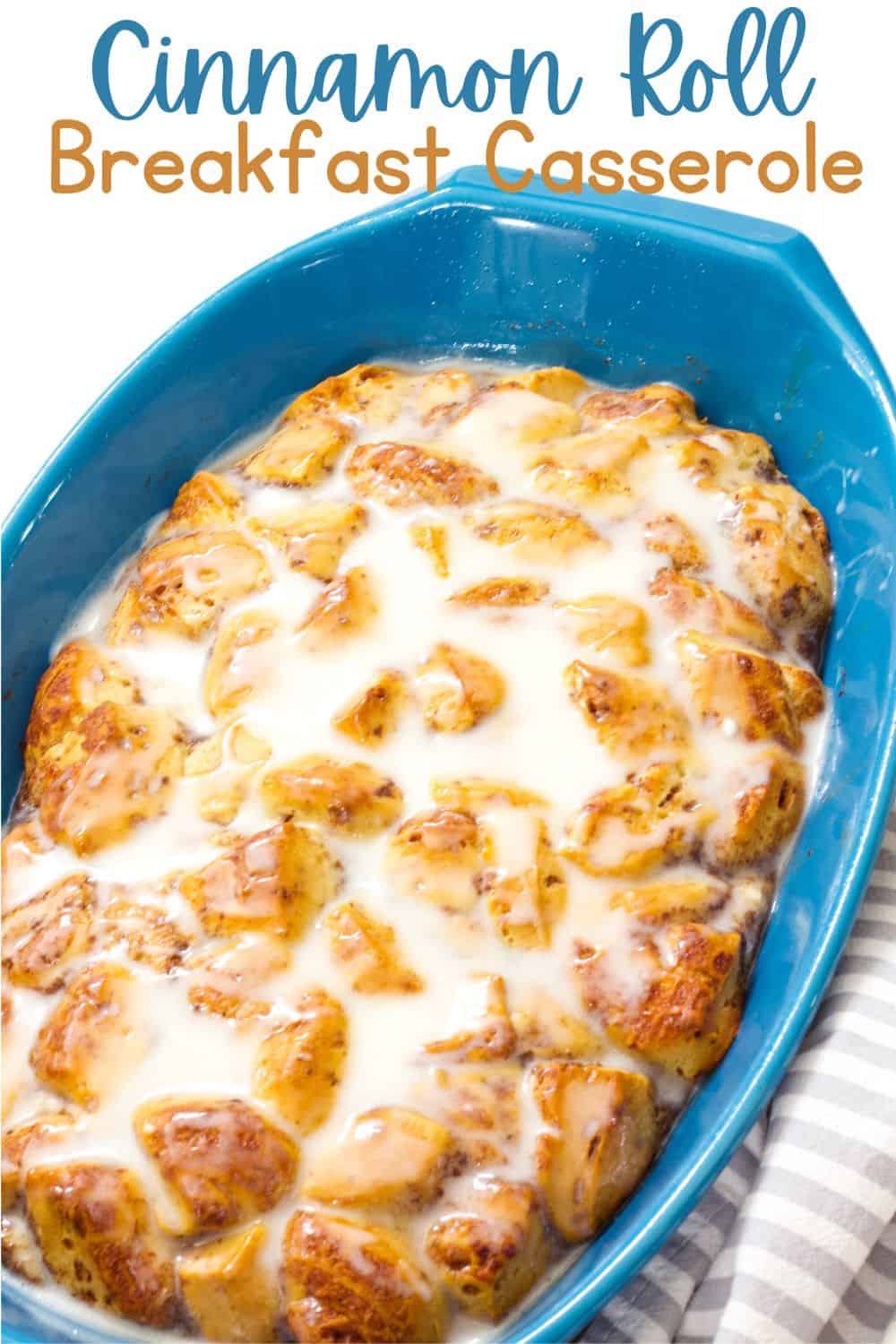 Cinnamon Roll Breakfast Casserole is an easy recipe that is sure to become a family favorite. We take some help from the grocery store to make this easy breakfast casserole by using canned cinnamon rolls.

When we make cinnamon rolls my favorite part is the middle rolls so cutting the cinnamon rolls into pieces and baking them in an egg mixture makes it so that there is more middle. So yummy! 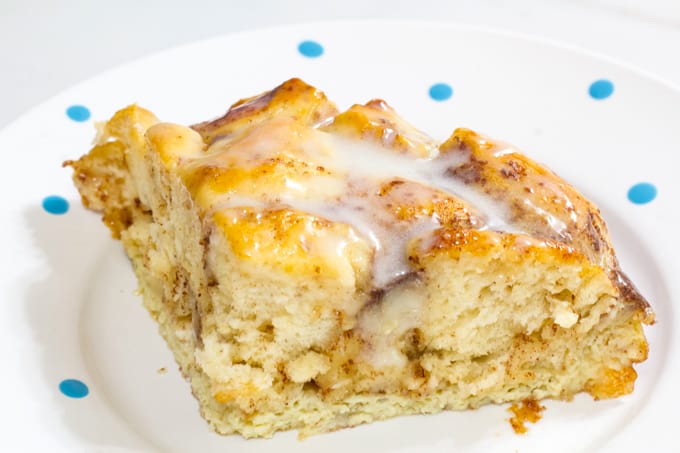 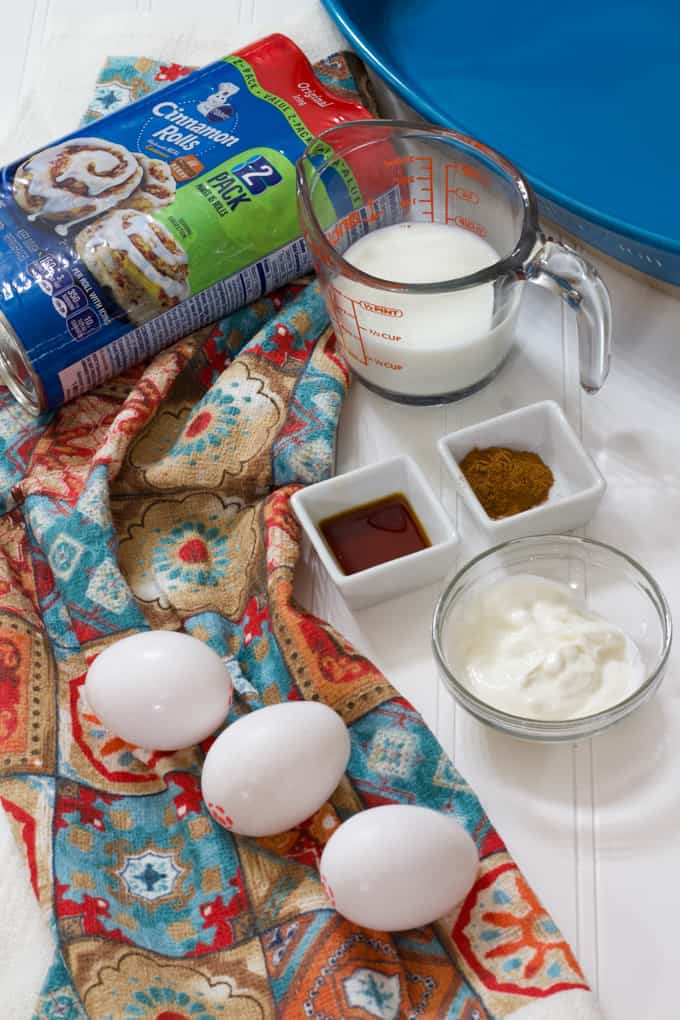 Just 6 ingredients are all you need to make this delicious cinnamon roll breakfast bake.

Cinnamon Rolls – we like Pillsbury cinnamon rolls but you could use the store brand or homemade.

Milk – I use whole milk because that is what we always have on hand.

Vanilla – make sure to use vanilla extract and not imitation vanilla.

Ground Cinnamon – we add a little to the egg mixture to make this even more cinnamon-y.

Sour Cream – this is added to the icing that comes with the cinnamon rolls because, well, why not?! It makes the icing go farther and is totally yummy. 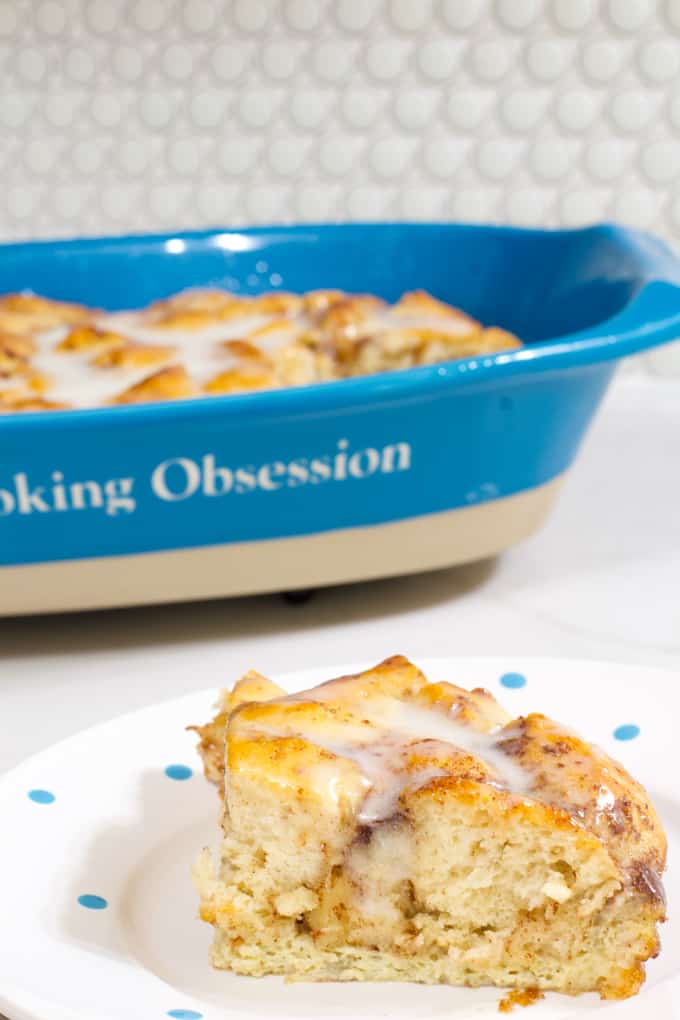 How to Make Our Easy Cinnamon Roll Casserole: 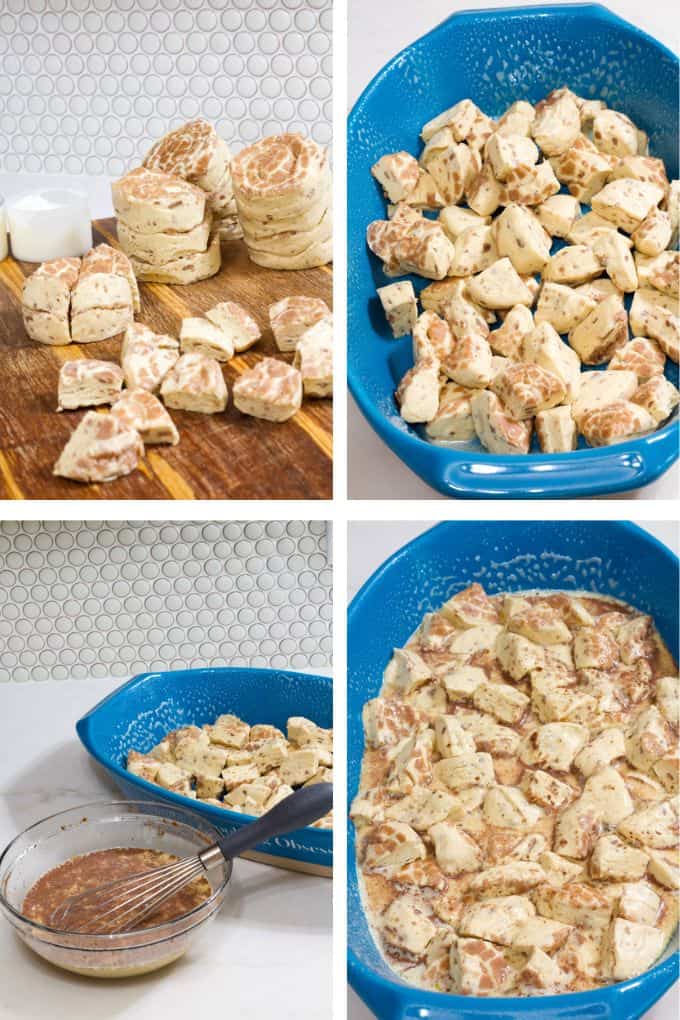 To Make Ahead of Time:

Our cinnamon roll casserole recipe is perfect for any special occasion, holiday celebrations, Sunday morning or any day of the week. We also like to make this when we have guests in from out of town and it always gets rave reviews. It is also good if you have guests but still have to get up and go to work because you can assemble it the night before and stick it in the fridge with a note on how to bake it so your guests can have a warm sweet treat that they just have to stick in the oven and then frost when it comes out.

Just assemble it ahead of time and cover with plastic wrap or aluminum foil, then bake it the next morning. Store it and the icing in the refrigerator. It may be necessary to increase the cook time by 5 minutes or so, just watch and take it out when it is a nice golden brown color. 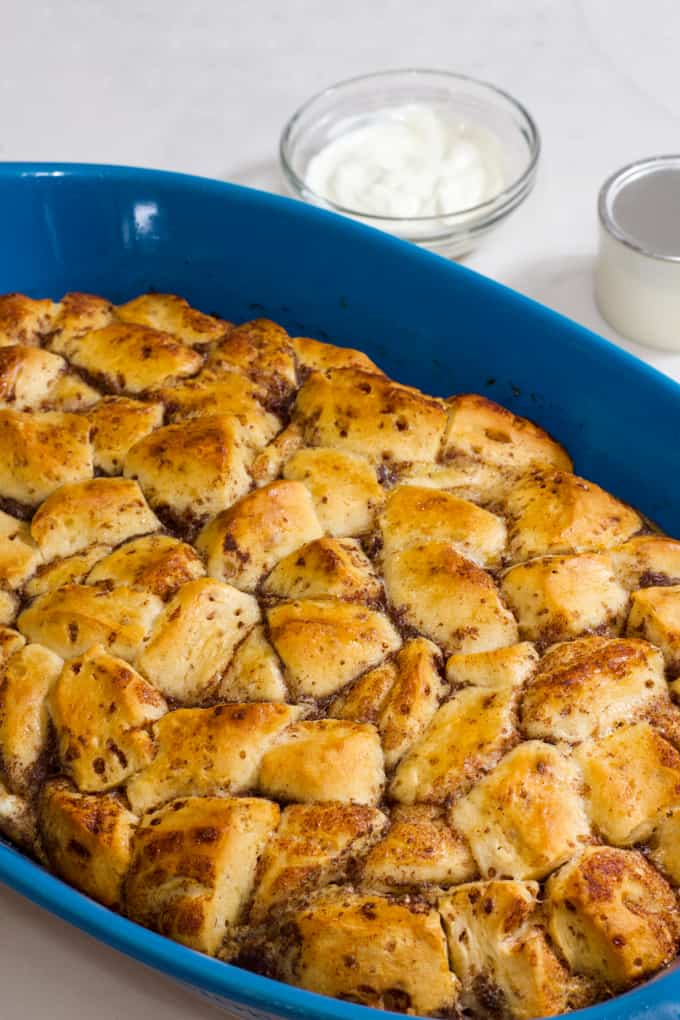 If using homemade cinnamon rolls you will need about 16, depending on the size of your cinnamon rolls. This is also a very forgiving recipe so as long as they all fit in your casserole dish then you will just have to adjust the bake time, if necessary. You will also need to whip up a batch of icing, I have a yummy maple glaze recipe that would make this delicious breakfast casserole even more delicious.

Use a sharp knife or even a pizza cutter to make quick work of cutting the cinnamon rolls into bite size pieces. 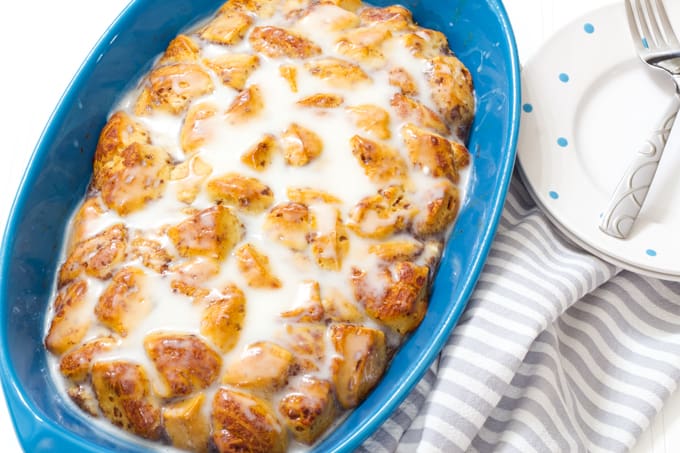 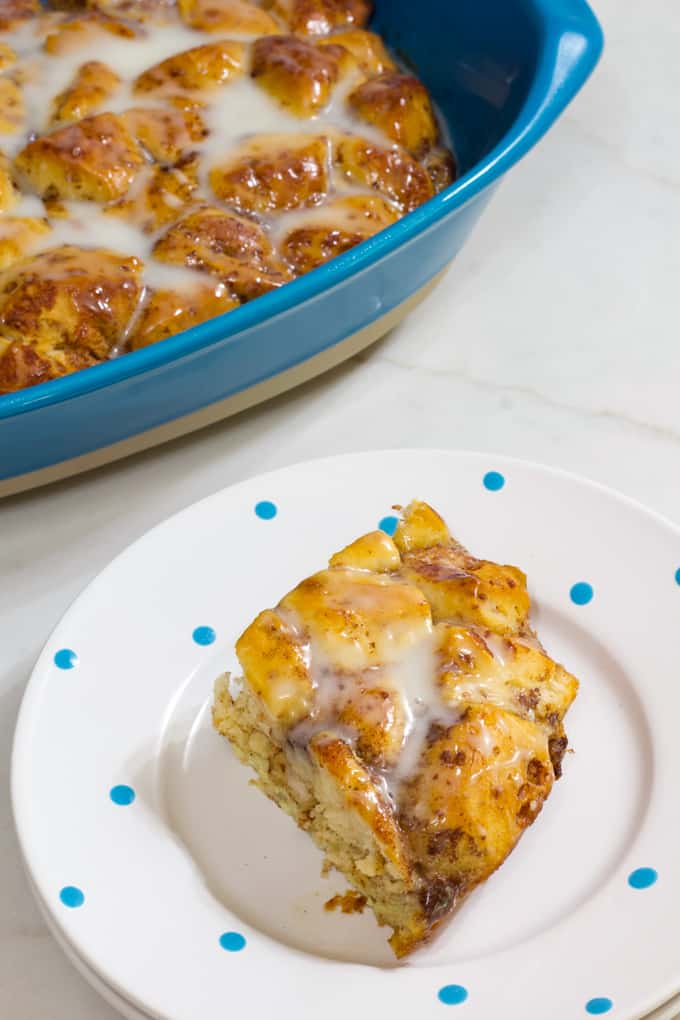 Store leftover casserole in an airtight container in the fridge for up to 3 days.

Warm in the microwave in individual servings for 45 – 90 seconds for best results. This also depends on your specific microwave so figure out what works best for you. 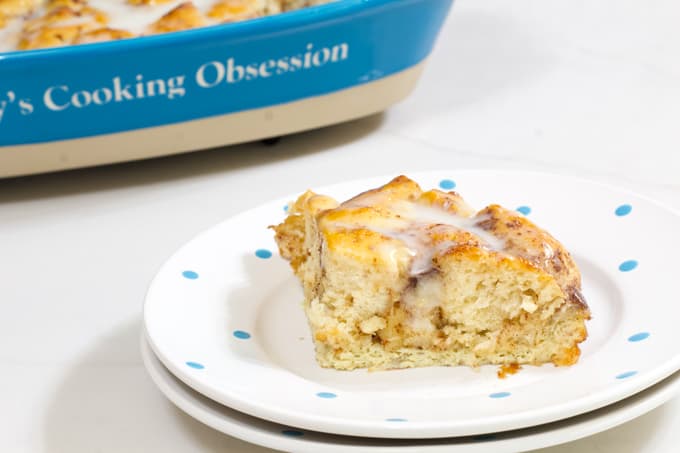 We like to serve this dish with Eggs in Hash Brown Nests and I have made that recipe so it bakes at the same temperature as this recipe. It is nice to make a savory dish like that with a sweet breakfast casserole like this.

Here are a few more savory dishes that would go great with this easy cinnamon roll breakfast casserole. 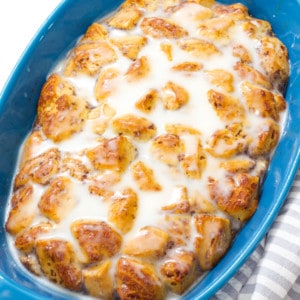 See in post notes above for valuable information that may help you make this recipe successfully.