Skinny Baked Chicken Spaghetti is lightened up by using nonfat half & half, 1/3 less fat cream cheese and 2% milk cheddar cheese.
We use a rotisserie chicken to make this dish quick and easy.

Pasta is very popular in our house. In fact, we eat some type of pasta every week.
And, it can be part of a healthy diet! 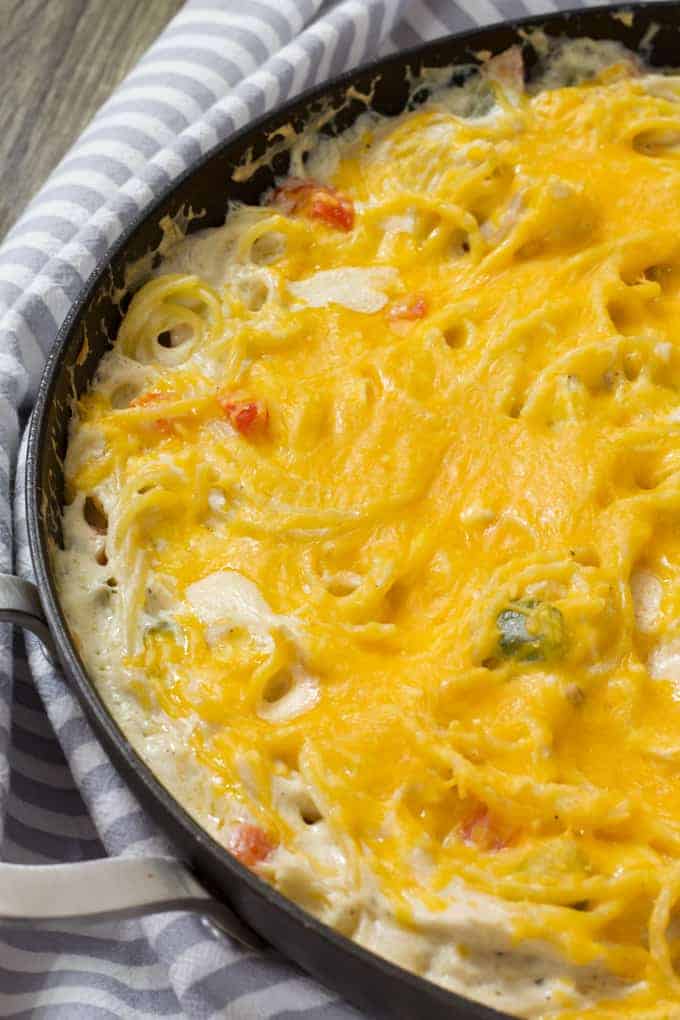 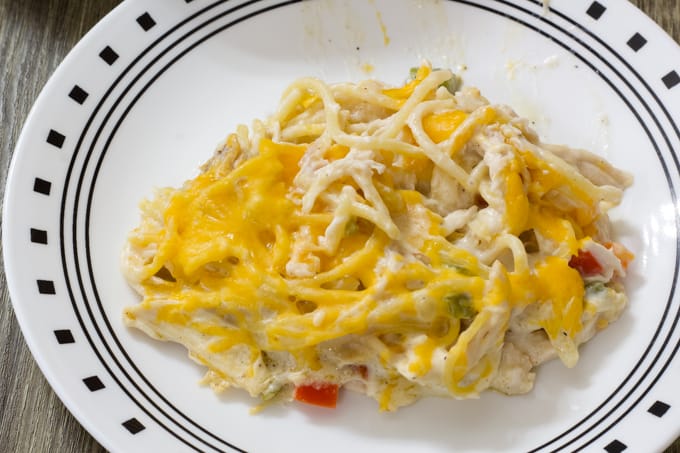 We are just about 2 years into this pandemic and grocery shopping every week has become some sort of scavenger hunt.

Are you having this problem, too?

At our neighborhood Walmart last Saturday the pasta section was totally decimated.

We had to go to our neighborhood Dillons where they had plenty of the Kroger brand pasta. 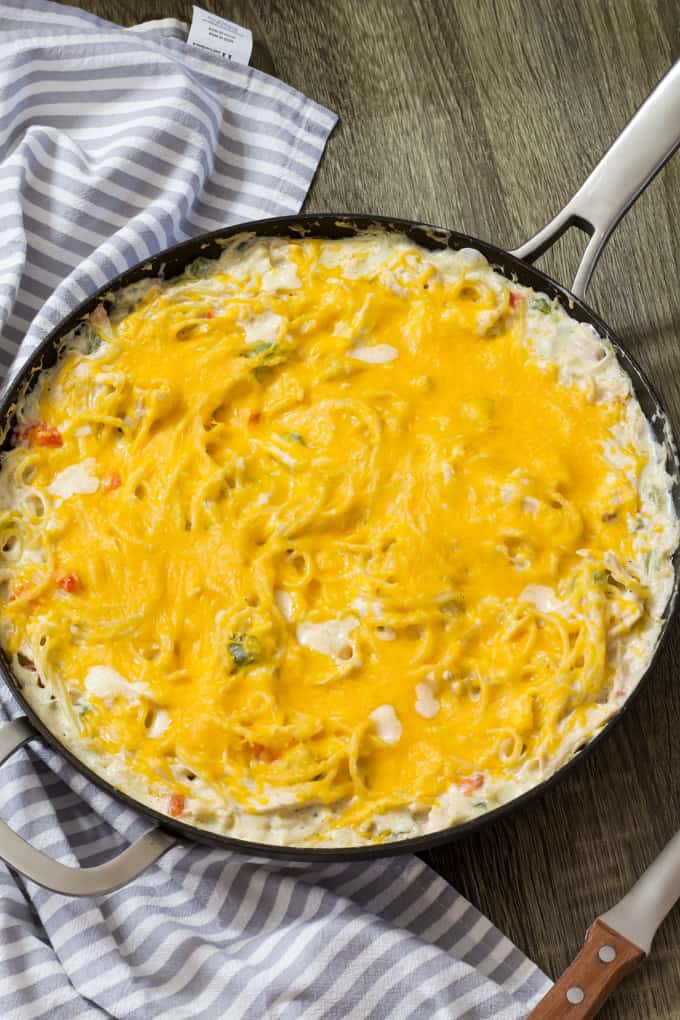 We are finding that we have to go to more than one store.

And we don’t always get to buy the brands we normally would.

It’s kinda take what you can get. 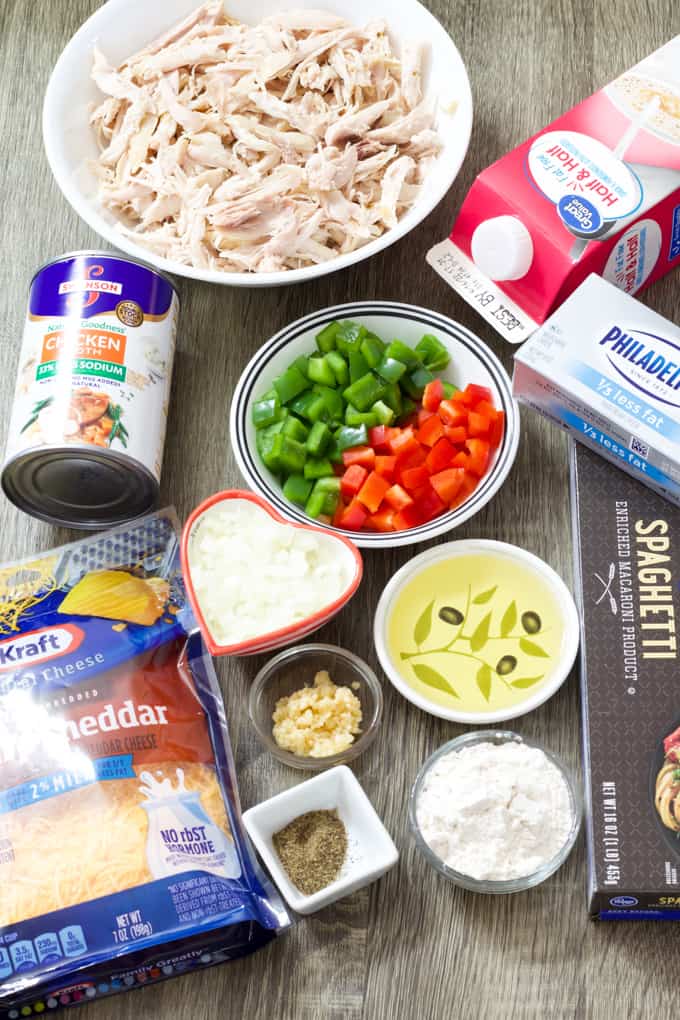 What does Skinny Baked Chicken Spaghetti even mean?

Well, I’ll tell you what it doesn’t mean first.

It doesn’t mean that this recipe is necessarily healthy.

What it does mean is that I have taken the traditional baked chicken spaghetti recipe and tweaked it here and there to make it better for you than the original version of this recipe.

So, swapping the whole fat half and half for nonfat.

Replacing butter with olive oil. While olive oil has slightly more calories than butter, it has less fat and it is the healthy fat that is part of a healthy diet.

And finally, using 2% milk cheese because it has slightly fewer calories and less fat. 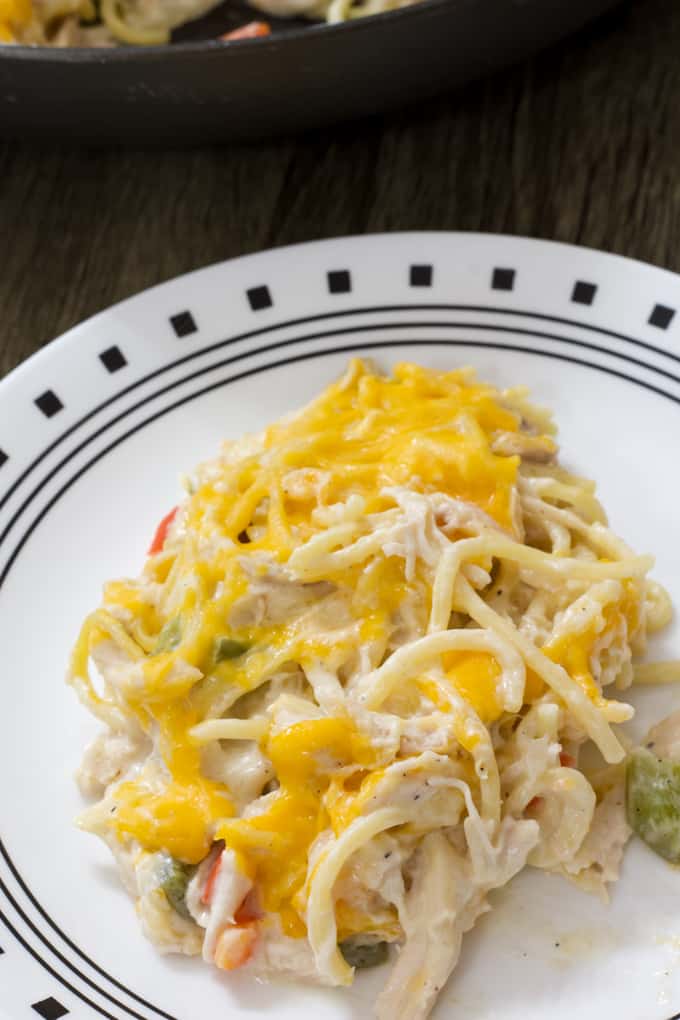 We still eat pasta once a week and have lost weight because we make low calorie versions of popular pasta dishes.

Also, we only eat dishes such as this occasionally, as a treat.

The pasta dishes we eat regularly have more vegetables and less cheese. 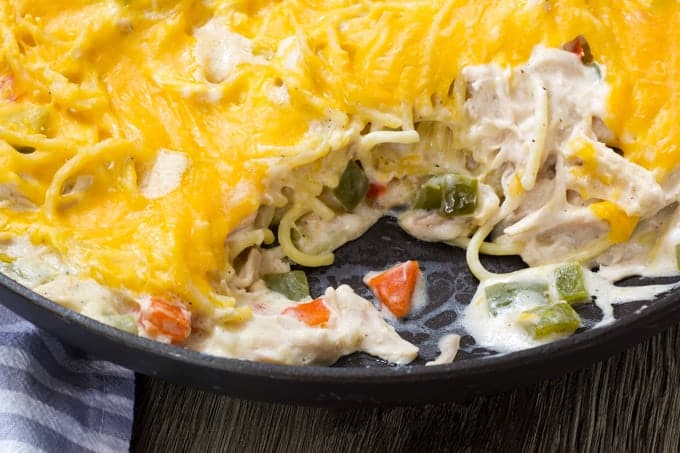 One has onions and one doesn’t.

There is a one skillet version and one we put over cooked pasta. 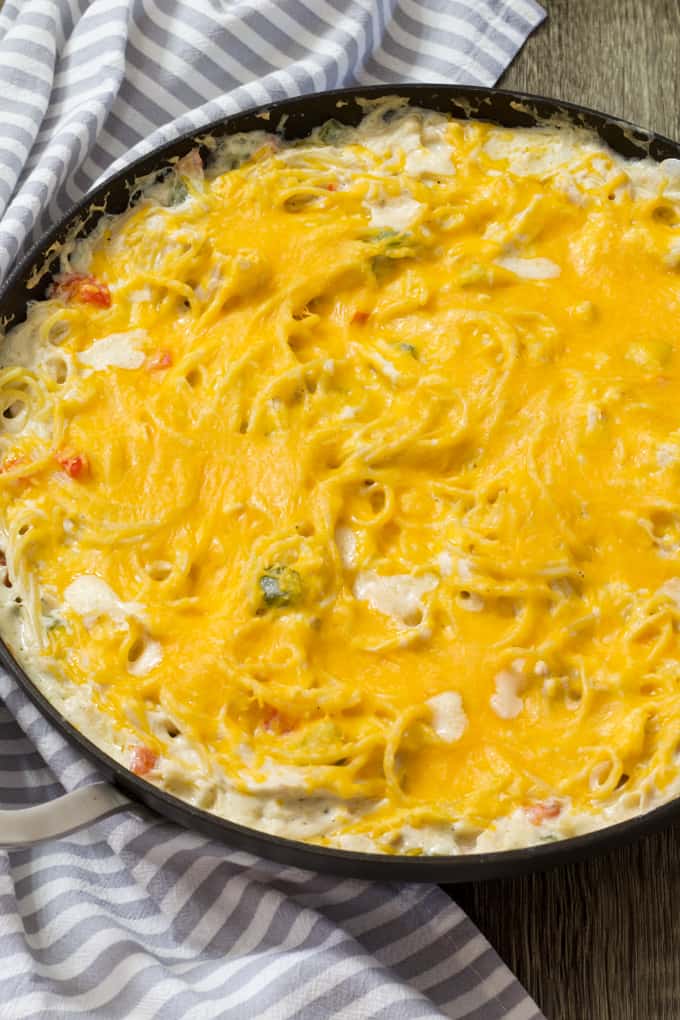 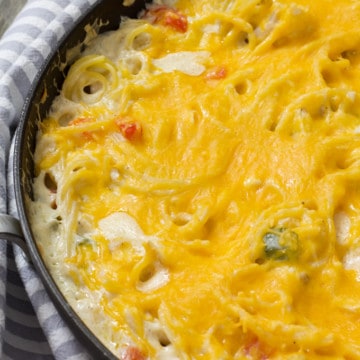 Be sure the skillet you use has an oven safe handle. You can also cover the handle with aluminum foil. Or, transfer to a casserole dish before you put it in the oven. 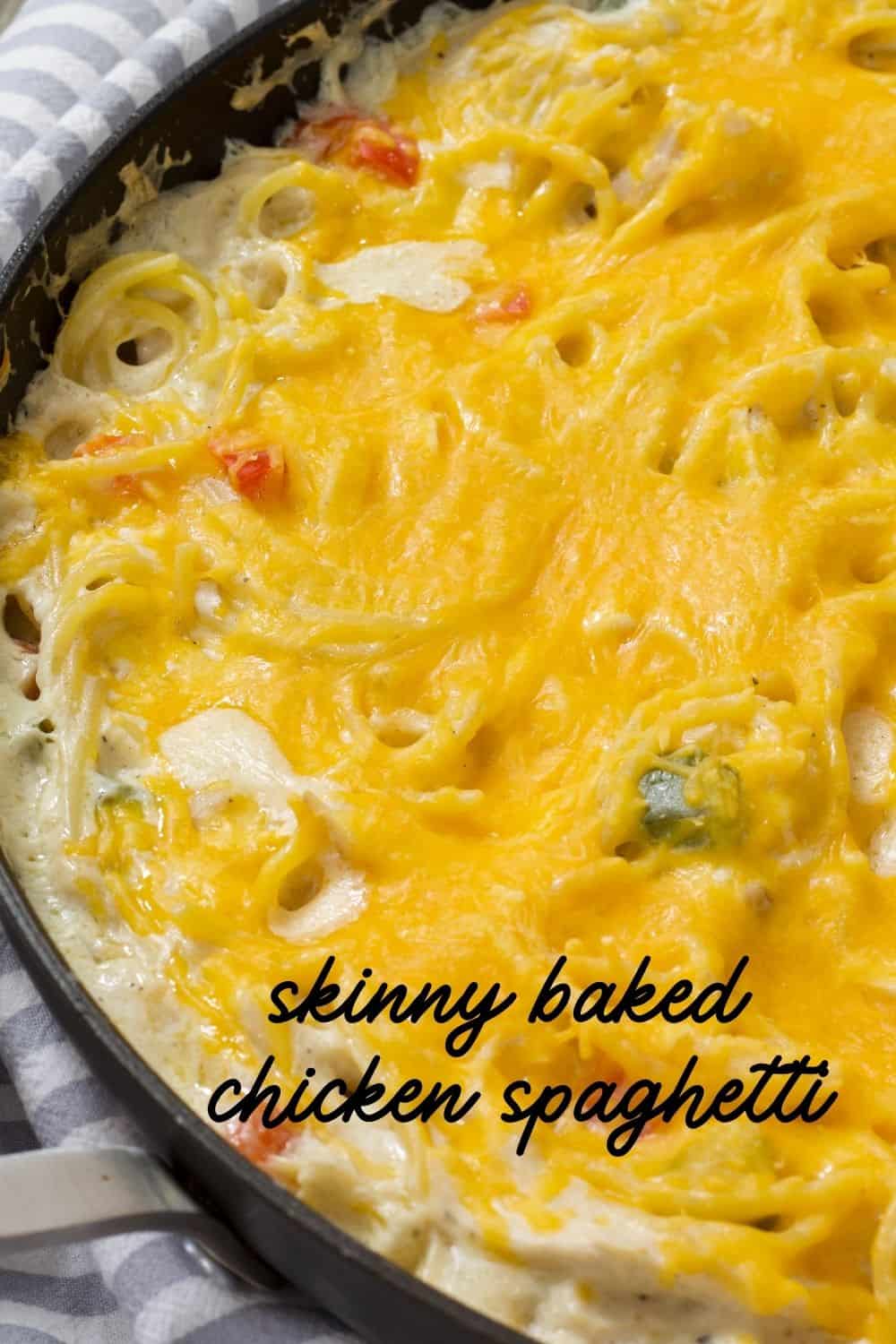 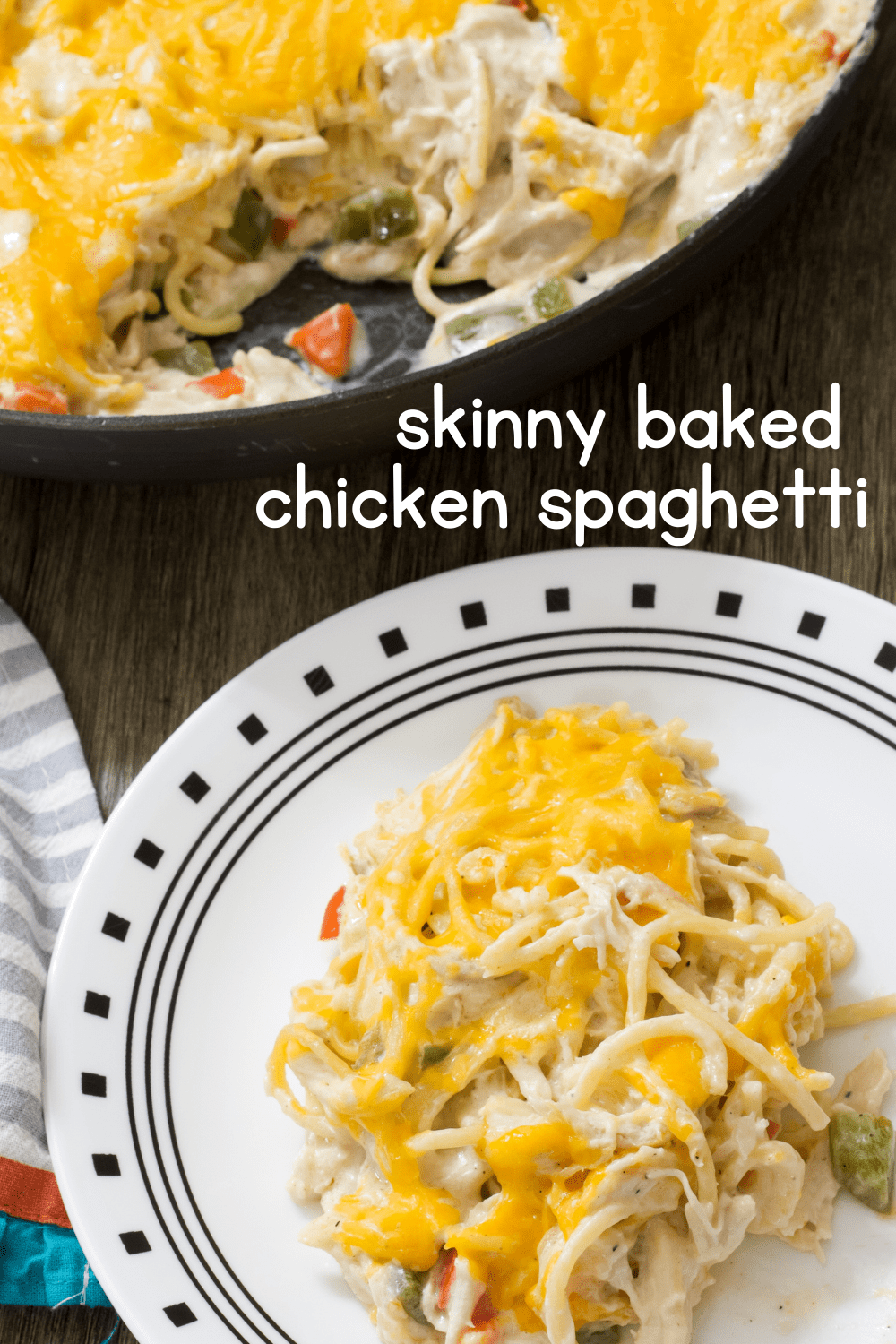